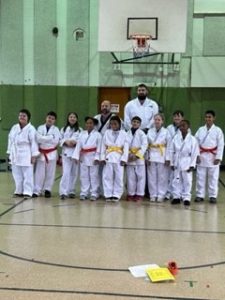 The entire student body at Summit Academy – Lorain Elementary participated in a January 11 therapeutic martial arts promotion ceremony. The event provided an opportunity for staff, students and family members to celebrate students’ achievements in meeting martial arts standards for their next belt levels as well as in reaching their academic and behavioral goals.

“For some it [participating in the promotion ceremony] may be easy, but for others it can be a challenge for them to overcome,” Sensei Willard explains. “That day, even those students who may not always be friends with each other showed support and gave encouragement to those demonstrating or getting ready to break their board.”

board breaking not so much one of physical ability, but of strength in character. “The breaking of boards represents overcoming the obstacles we encounter in life,” he explains.

The Lorain Elementary ceremony drew plenty of fanfare from family members, friends and students. Claps, hoots and hollers filled the school dojo as students broke boards. Sensei Willard says the students were happy to see their friends succeed and do a good job. He adds that the kindergarteners and first-graders showed tremendous bravery during the event. 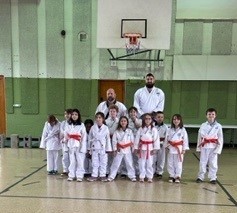 “They have the least experience yet showed a lot of courage by volunteering to come out solo and demonstrate something,” he says.

Even for those who did not receive a promotion or Blue Star, the ceremony brought joy in the celebration of others’ accomplishments.

“The students were less focused on themselves and happy for others,” Sensei Willard says.

For more information about the Summit Academy Lorain Elementary or the Therapeutic Martial Arts program, please contact us at 440-277-4110.